The Bus for ISELED, Sensors and Actuators

ILaS, the new “light bus” in cars – not only for light

The ILaS bus (ISELED Light and Sensor network) has the potential to displace the LIN bus from the market, because ILaS enables faster communication between controller, sensor and actuator at lower cost. 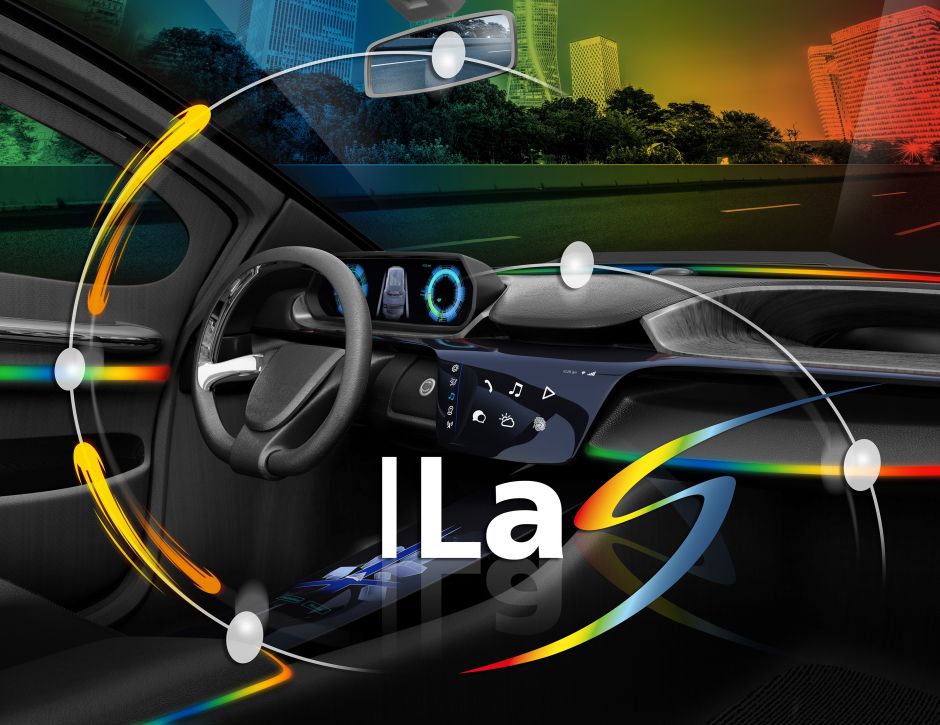 ISELED – the “Digital LED” – was presented for the first time in November 2016 at the electronica trade fair. It is being used worldwide by more and more car makers, but also in industrial and aerospace applications, because of its numerous advantages. This year’s volume is already in the high double-digit millions, and the billion mark will be reached in just 3 to 4 years.

ISELED was originally developed to control many RGB LEDs mounted on light strips in the dashboard over short distances, and with the highest colour fidelity. But with its rapidly increasing acceptance, the need soon arose to roll out ISELED to other light applications in the vehicle, and then network these applications: the idea of the ILaS network was born. ILaS stands for “ISELED Light and Sensor”. It was to take only two years from the idea to successful implementation – the first functional prototypes of the ILaS chip have been available for a few days now.

In current lighting applications using ISELED LED light strips, these are still docked via a LIN hub to this widely used bus. It is important to note, however, that the capabilities of ISELED – including a high refresh rate and a large number of possible clients – can only be utilised to a very limited extent owing to the limitations of the LIN bus (see figure 2).

ILaS in Action: Watch the video about its capabilities

ILaS removes these limitations. Docked directly to fast 10BASE-T Ethernet using an Ethernet-to-ILaS bridge chip, lighting scenarios are controlled directly from the central head unit (see figure 3). Since ILaS is deterministic – unlike other bus systems – all control resides with the initiator, making ILaS especially suitable for modern network concepts such as a zone architecture with centralised control (see figure 4). At the same time, all the intelligence is contained within a single control unit, so it is very easy to synchronise lighting scenarios throughout the vehicle. Plus there is no need for time-consuming coordination cycles and specifications during development, which are essential for decentralised systems with multiple lighting control devices. In contrast, the software here only has to be updated in one place – in the central control unit –significantly cutting down on version management and costs. This also makes it possible to store predefined or more extensive lighting scenarios in the control unit and activate them at a later point in time as part of an upgrade – marking another step towards the software-defined car.

ILaS can already transmit light sequences at video speed, thanks to a lean protocol and with a rather moderate bus data rate of 2 Mbps – while other buses reach their limits either conceptually or due to the limited address range. Even so, there is still headroom with ILaS. Unlike classic parallel bus systems, where the data rate quickly reaches physical limits, ILaS is based on a point-to-point topology. As requirements increase further, it is therefore relatively easy to scale up the data rate and thus the data throughput. The concept for ILaS 2.0 is already in the pipeline.

Integration of sensors and actuators in an ILaS Network

ILaS can do more than just light. The bidirectional communication protocol offers the possibility of individual querying as well as multicast diagnostics for all clients. In combination with the three GPIOs (general-purpose inputs/outputs) on the transceiver module (see figure 5), sensors and actuators can be integrated into the network without any additional interface, software or cabling (see figure 3). For example, it is possible to connect touch sensors that can be used to individually adjust the brightness or colour of the reading light. An additional vibration motor can provide haptic feedback to confirm the user’s input. Infrared sensors – e.g. to detect seat occupancy as a cost-effective alternative to cameras – can also be integrated directly into the network. There are practically no limits to the possible lighting and sensor technology applications.

The example in figure 3 shows an ILaS network in a modern vehicle architecture. Three ISELED RGB LED strips are networked with each other via the ILaS transceiver, type INLT220Q, using UTP cable (unshielded twisted pair). On the light strip itself, point-to-point connections to the LEDs are implemented via an economical chip-to-chip interface. The third communication port (client side port, CSP) is used to connect “clients”: it can be used to connect ISELED LEDs, which are daisy chained to each other on the light strip using a simple two-wire configuration. The lower light strip also has two capacitive touch surfaces that are evaluated with a touch sensor. The sensor is integrated into the network via the GPIO interface on the INLT220Q, and can be read by the control unit via the return channel. A vibration motor provides haptic feedback when a touch is detected. Communication between the first INLT220Q module in the network and the Ethernet-to-ILaS bridge also takes place via the GPIO interface. This is how the ILaS network is connected to 10BASE-T Ethernet and communicates directly with the central control unit.

The ILaS transceiver is the key component in the network. The core logic of the ILaS transceiver module handles all sequential control as well as communication with the other clients via the ILaS protocol. The HV-PHY (high voltage physical layer), which was developed from scratch, forms the heart of the new transceiver module. The HV-PHY meets the high requirements for wired pins in vehicles, such as a dielectric strength of ±40 V and ESD stability of ±8 kV (HBM). Differential transmission technology in conjunction with UTP cables ensures the required resilience to radio interference as well as low interference emission – and without additional external filter elements such as common mode chokes.

Two of the three communication ports use this HV-PHY – both the initiator side port (ISP) and the extension side port (ESP). It is possible to connect ILaS transceivers to each other via these ports using UTP (unshielded twisted pair) wiring. Theoretically, several thousand transceivers could be connected in series.

The third communication port (client side port – CSP) is used to connect “clients”. It can be used to connect ISELED LEDs, which are daisy chained together on the light strip using a simple two-wire configuration.

This port uses a PHY with a dielectric strength of only ±5 V, as is already implemented in the controller module for the ISELED LEDs. This PHY is designed for pure on-board communication on the light strip over very short distances. The requirements for these local pins are much lower than for the wired pins. Consequently, this PHY can be much more compact. This makes it possible to reduce the chip area and additionally optimise other parameters, such as power dissipation.

OTP integrated within the ILaS Transceiver

The INLT220Q ILaS transceiver also features a temperature sensor as well as an A/D converter (ADC), which allow the operating voltage and temperature of the device to be monitored. In addition, it has OTP (one-time programmable) memory where users can store information about the product (manufacturer ID, batch number, etc.) and the ILaS network (network device address, etc.) This means that even if individual components fail, the remaining network devices can still be controlled – and without having to adjust the addressing table in the software. The memory is programmed via the ILaS protocol; this can be done either by the supplier or by the OEM itself.

A major challenge in automotive lighting systems is the limited installation space available. Today’s systems need many external passive components, with corresponding space requirements and complex wiring on the light strip. Then there is the question of EMC: more components mean more wiring, which in turn results in more interference. Because of EMC issues, until now it was usually necessary to use multilayer rigid PCBs, conflicting with the desire to take up little space and fit them in curved dashboard surfaces. By integrating the controller chip and RGB LEDs in one package, only a few external passive components are required. Added to this is the uncomplicated wiring between the ILaS transceiver and the connected ISELED LEDs, in the form of a simple differential two-wire link. Even with a large number of LEDs on the light strip, a two-layer board is therefore usually sufficient. In this way, flexible PCBs that are particularly convenient to install can also be realised; one Alliance member already offers flexible PCBs of this kind for ISELED light strips.

AUTOMOBIL-ELEKTRONIK talked to Robert Kraus, co-founder and CEO of Munich-based semiconductor manufacturer Inova Semiconductors, about the market, high-speed data streams, the dashboard of the future and trends in interior lighting. What it means for LIN that ILaS is about to conquer automotive applications.

The future of ISELED and ILaS

Today, 39 companies all over the world support this ecosystem as members of the ISELED Alliance formed in 2016 (see figure 7): lighting tier 1s, LED and semiconductor manufacturers, specialised lighting designers and many others. The great success and rapid global acceptance of ISELED are due in large measure to the successful work of this industry consortium. The Alliance’s well functioning structures are now fully benefiting ILaS.

For example, one major semiconductor manufacturer is already working on an Ethernet-to-ILaS bridge chip; another is working on a matrix RGB component. This does not require its own ILaS transceiver, as the ILaS interface is already integrated into the matrix RGB chip. There are also ideas to create sensor chips with a monolithically integrated ILaS interface. Alliance members are currently developing software that will soon enable them to offer a comprehensive system solution for ILaS as well.
Besides the development of future ILaS semiconductor components, there is also a major focus on new package technologies, because limited installation space is a central issue in modern lighting applications in vehicles. Compact, highly integrated SiP (System-in-Package) solutions with low power dissipation are essential to realising car manufacturers’ imminent plans to use hundreds of LEDs, combined with sensors and actuators, in their vehicles.

Development activities relating to ILaS are running at full pace, and new ISELED products are also on the way: the next generation called “ISELED 2.0” with significantly expanded functionality is already on the drawing board. The ISELED and soon also ILaS ecosystem is therefore set for extensive growth, as visitors will be able to see at the electronica trade show in November. In parallel, the ISELED Alliance is now becoming the ISELED/ILaS Alliance.

Stefan Hoffmann works as an Applikations-Manager at Inova Semiconductors.